Article : Comparing yourself to others will ruin you. Here's why (by A-Grade) 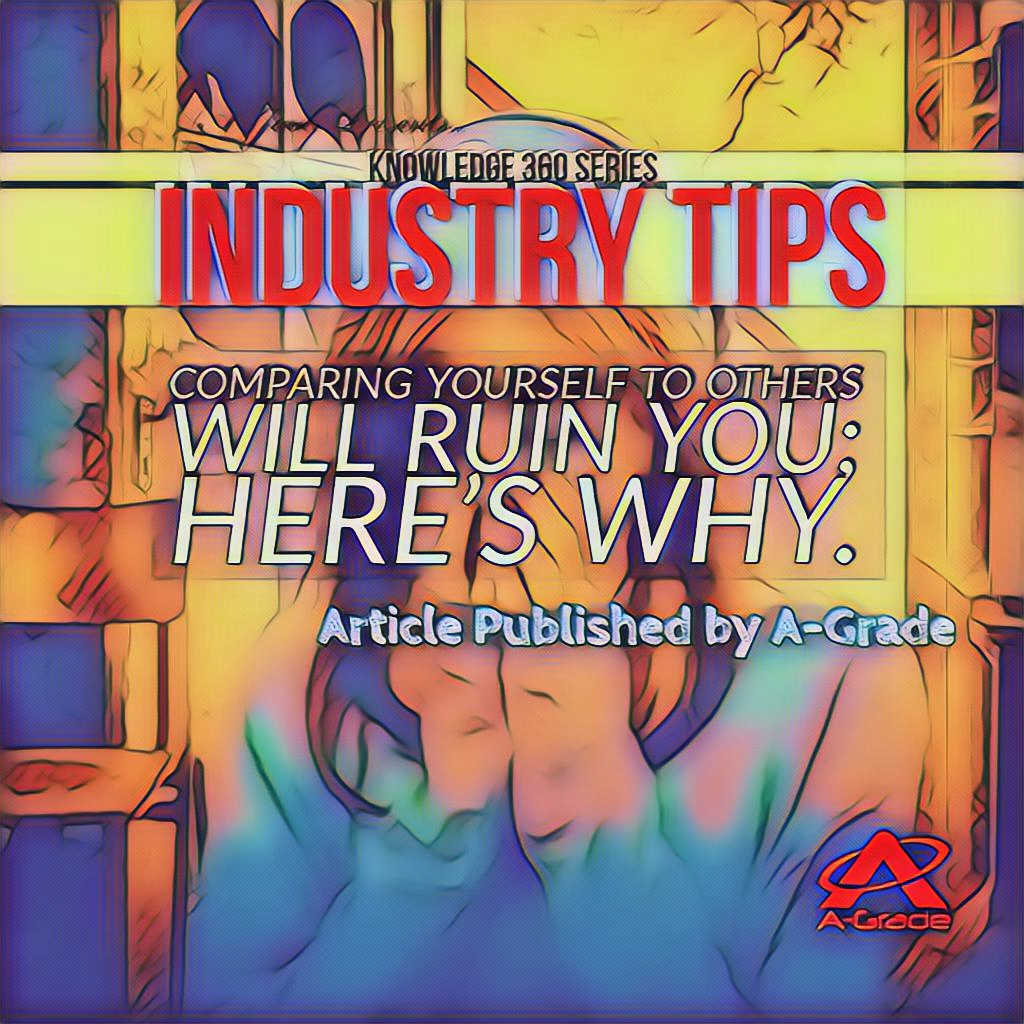 This particular article is something we believe will be useful to a broad range of creatives because it is more about "how" your doing rather than "what" your doing.

There really are no if, buts or maybes on this one, understand that whether you are starting a business, creating content or embarking on a new career, your going to have to address the elephant in the room; dealing with your feelings. So #LetsTalkAboutIt. First things first, let's make this 100% clear for all the tough types pretending they do not have feelings, emotions or more precisely, character flaws to address; the vast majority of use have been raised in cultures which benefit us in many ways, but also carry many toxic (but historically necessary evils) aspects to them; namely, in many cultures, men particular have not been encouraged to recognise their emotions.

But lets be honest; To claim that one does "Not have emotions" is not a symbol og strength, it is a lie and a sure tale-tale sign of your achilles heel to anyone with an ounce of life or industrial experience.

Whether it's becoming an entreprenuer, a filmmaker, a musician or a writer; the process of progress can be nerve wrecking and something that many people go through depression, suffer mental breakdowns or even become suicidal trying to keep it up for sustained periods of time.

If you have not experienced it yet, let A-Grade be the first to warn you in depth, every single time you launch a new product or communicate something to the world, you expose yourself to mental vulnerability; But thats ok, life is full of different forms of turbulence.

Many creatives (particularly songwriters and artists) will instantly recognise this vulnerability we speak of as a regular part of life, it's unavoidable. Even artists with great years of experience such as Mary J Blige still experience nerves after singing on thousands of stages.

Expeiencing the emotion isn't the issue, its how you choose to react to it, or the fact you are reacting instead of anticipating. Wwe could pattle on, but let's move on because this article is about more than combatting social anxiety / stage freight, it's about processing your emotions at the core.

"The Underlying Facts; Combatting the Fear of Criticism"

As we said, this article isn't just about stage freight. It's about the whole emotional process of "putting yourself out there" which many seem to believe they are immune to until they experience it and start "acting on" negative emotions unconsciously; and often in the most self-destructive and negative of ways.

What we want to address is the underlying factors that lead to this in advance so that creatives on their journey (particularly those walking alone) can know that there is in fact a way, to channel your energy to convert a negative experience into a positive outcomes. You will require regular moments of honesty with yourself if you are going to navigate yourself to career, financial or social success purely because often nobody else can be as honest as yourself about your reality. There is a fine line between being your own biggest critic in a constructive way Vs starting to drown, wallow and spiral in your own doubts.

The first will lead to brutal honesty that will push a person with the willpower to continue evolving, the second will become a burden unto themselves and others by becoming negatively charged in all their thoughts on growth. Naturally the first option is the only ideal that makes sense for someone seeking progress as a Musician.

Lifted right from "Think and Grow Rich" by Napolian Hill; Their fear criticisms of themselves reflect their fear of criticism by others and that slowly begins to choke all the "life" out of their network and goals.

“Put your foot upon the neck of the fear of criticism by reaching a decision not to worry about what other people think, do, or say.”- Napolian Hill (Think and Grow Rich)

"Process your emotions in healthy ways;

We have literally witnessed artists self-destruct within 2 years of getting started purely because they were not honest about these things; and an interesting fact (personal to our experience) is that we found contrary to popular stereotypes is that female creatives/entreprenuers actually have alot more general endurance in the area of handling their emotions.

Perhaps there is a factor of experience involved here but there has been definitely a pattern noticed in female creatives with being able to handle rejection and criticism and process it in healthier ways than many of our male clients, many of whom, are just not well adjusted to being emotionally vulnerable. So particularly for our male creatives; we are encouraging that you get more into with your emotions so you can remain and project a balanced individual when conducting business. Its far more vital than one might imaginem Whilst for many male creatives; it is noticeable that many have no emotional outlet other than their creative crafts, and in a society where men are often taught to repress showing emotion as it was believed it exposes "weakness", even when they have creative outlets, because of a lack of honesty within; many creatives simply "hold things in" until they come out the most destructive ways.

"Before you self-destruct; Address insecurity."

Sometimes it may come out in the form of escapism (drugs, overeating, bingeing, living in excess) or as volatile emotions, jealousy and resentment are particularly common but masked emotions in the creative industries purely because of the reasons stated in previous paragraphs.

People do not like to admit they're vulnerabilities; instead they intuitively (and unconsciously) act on their desire to feel "secure" again often by pointing the finger at someone else. Think about it, How does a human address insecurity ? Who's the last person you heard that was called insecure and reacted like "yeah I know, it sucks, I'm working through it"? It's pretty rare. We doubt these people exist in general other than a few rare experiences with (again; noticeably mostly female) creatives that have managed to create an ironclad and upfront mentality towards their emotions and insecuritys. For 95% of people in general, to be called out to recognise their insecurity is an insecurity in itself; so rather than expose that vulnerability; they will swear blind they are not "in their feelings" and project the energy onto someone else in the form of blame. As stated previously, jealousy and resentment in particular are the destructive forces which will occur when a person does what was said in the previous paragraph. They will release a "4/10" mixtape/EP and then get mad at the person who' sees better results without processing the fact that person may have just been better prepared to engage their audience.

This would be ok if it was friendly competitiveness that drove them to push harder, but often it's a chain of negative motions that demotivates the person experiencing it rather than motivating them.

They begin weighing themselves up to their competition in all sorts of unhealthy ways, adjusting their format, changing their natural rhythm, altering their brand and even their ethics in order to "change themselves". They imagine they are "fitting the mould" but in fact they are just distancing themselves from that which is truly interesting and original about them eventually leading to an awkward, inauthentic and noticeably negative type of aura that turns people off immediately upon interaction.

Again; what is to be considered here is not simply "not being negative" or not getting "in your feelings" but actually creating healthy mental processes to address your feelings in ways that create healthy mental cycles that will keep you productive and maintain your mental health, rather than you constantly needing company to stroke your ego because you get to that "sad place" of being afraid to listen to your own thoughts.

People get here by first fearing what others think, and then believing what others think, and thus fearing they're own thoughts will reflect others. The main purpose of this article is to consider in what ways we can all address this by systemising our emotions into a format that serves and fuels our progress rather than acting as an anchor that will prevent your movement and deplete your energy, network and resources altogether. Much love A-Grade  (Circa 2019)

Article : The Music industry ; Art VS Business : What is it really ?

Articles : Here's the reason why paid ad's (PPC) will be the future for all creatives